Sienna Resources (SIE—TSX.v) (A1XCQ0 –FSE) (SNNAF—OTCBB) conducted a two-hole drill program in October at its Slättberg project in southern Sweden. This program targeted two electromagnetic (“EM”) anomalies detected by downhole surveys performed at the end of the 2018 drill program. One was detected in the vicinity of drill hole SIE-18-006 located at the west end of the trend of historic nickel mines, and one in the vicinity of drill hole SIE-18-003, near the center of the trend of mineralization (see Fig. 1).

Jason Gigliotti, President of Sienna stated, “We are very pleased with the results of this drill program.  The PGE numbers encountered were a very positive surprise and show that the system is more diverse than originally thought. These are some of the highest grades for PGE in the region. We also went through a previously unknown mined-out section.  This indicates that the systems are potentially deeper as the mined-out section was near the limits of the known mining depths during the time that this area saw its mining production. We are now immediately formulating a plan for the next phase of work on this project.”

Textures in the sulfide intervals are suggestive of tectonic remobilization of sulfides from a nearby source. Multiple thick mafic dikes were also intercepted in SIE-19-001, which are not seen in surface exposures, nor in the shallow drill holes elsewhere in this area. The abundance of sulfide, higher PGE values, and a swarm of mafic dikes suggest that Sienna is moving closer to a source area for the sulfide mineralization and associated mafic intrusions as it drills to progressively deeper levels in the western target area. 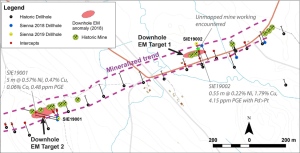 *True thickness estimated to be 55-65% of reported interval

ᵻ True thickness estimated to be 25-40% of reported interval