Sienna Receives Drill Permit for the Blue Clay Lithium Project in the Clayton Valley of Nevada.

January 21, 2022, Sienna Resources Inc. (“Sienna” or the “Company”) (SIE—TSX.v, SNNAF—USA, A1XCQ0–Germany) is pleased to announce that it has received the drill permit for the planned upcoming drill program on the Blue Clay Lithium Project in Clayton Valley, Nevada.  This project consists of 94 contiguous claims totaling approximately 1950 acres prospective for lithium.

Jason Gigliotti, President of Sienna Resources, states: “This was the final step needed to start our much anticipated maiden drill program on the Blue Clay Lithium Project right in the heart of the Clayton Valley, the preeminent address for lithium in North America. We anticipate the commencement of drilling shortly, coming at a time when lithium demand and prices are at all-time highs.  Nevada has become one of the most sought after lithium addresses in the world, and Sienna is located in multiple locations in this prolific region.   Management is very optimistic about the prospects for this project and expects to have a steady flow of news moving forward.” 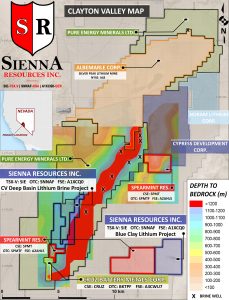 Sienna Resources is focused on exploring for and developing high-grade deposits in politically stable, environmentally responsible and ethical mining jurisdictions. Sienna is partnered with a New York Stock Exchange-listed mining company on two separate projects in Scandinavia including the past-producing Bleka and Vekselmyr orogenic gold projects in southern Norway which are both greenstone-hosted gold systems, and the Kuusamo platinum group elements (PGE) project in Finland directly bordering the LK Project being advanced by Palladium One Mining Inc. In North America, Sienna’s projects include the Marathon North platinum-palladium property in Northern Ontario directly bordering Generation Mining Ltd.’s 7.1-million-ounce palladium-equivalent Marathon deposit. Sienna also has the Clayton Valley Deep Basin Lithium Project in Clayton Valley, Nevada, home to the only lithium brine basin in production in North America, in the direct vicinity of Albemarle Corp.’s Silver Peak deposit and Tesla Motors Inc.’s Gigafactory and the recently acquired Blue Clay Lithium Project in Clayton Valley Nevada. Management cautions that past results or discoveries on properties in proximity to Sienna may not necessarily be indicative to the presence of mineralization on the company’s properties.

All matters were voted in favor at the recently held Annual General Meeting, including the re-approval of the Company’s Stock Option Plan with a minor change (the “Amendment”) motioned from the floor to automatically extend the expiry date if the expiry date falls within a blackout period during which the Company prohibits Optionees from exercising their Options. As amended by the Amendment, the expiry date of the affected Options is extended to no later than ten (10) business days after the expiry of the blackout period.