March 25, 2022, Sienna Resources Inc. (“Sienna” or the “Company”) (SIE—TSX.v, SNNAF—USA, A1XCQ0–Germany) is pleased to announce  that the maiden drill program has revealed a new lithium discovery on the 100% owned Blue Clay Lithium Project in Clayton Valley, Nevada (See map below).  Lithium values as high as 1230 ppm Li were encountered with 800 ppm Li over 120 feet, including 1,011 ppm Li over 40 feet.  The Blue Clay Lithium Project consists of 150 contiguous claims totaling approximately 2,950 acres prospective for lithium right in the heart of the Clayton Valley in Nevada, which is currently  home to the only producing lithium region in North America.

Jason Gigliotti, President of Sienna Resources, states: “We are very pleased to have made a new lithium discovery on the maiden drill program in the Clayton Valley of Nevada.  Domestically sourced lithium is in massive demand especially in light of recent global events.  We couldn’t be more excited about this new discovery and are immediately planning the next phase of drilling to delineate the lithium held within the property.  I was recently down on the property and am very optimistic about the short and long term future this project will have on the growth of Sienna Resources.  When you factor in that lithium prices are at their all-time high today, management is very enthused about this new discovery.” 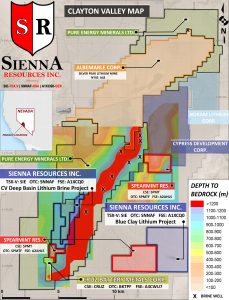 Mr. Frank Bain, PGeo, a qualified person as defined by National Instrument 43-101 has reviewed and approved the scientific and technical disclosure contained within this news release.

Sienna Resources is focused on exploring for and developing high-grade deposits in politically stable, environmentally responsible and ethical mining jurisdictions. Sienna is partnered with a New York Stock Exchange-listed mining company on two separate projects in Scandinavia including the past-producing Bleka and Vekselmyr orogenic gold projects in southern Norway which are both greenstone-hosted gold systems, and the Kuusamo platinum group elements (PGE) project in Finland directly bordering the LK Project being advanced by Palladium One Mining Inc. In North America, Sienna’s projects include the Marathon North platinum-palladium property in Northern Ontario directly bordering Generation Mining Ltd.’s 7.1-million-ounce palladium-equivalent Marathon deposit. Sienna also has the Clayton Valley Deep Basin Lithium Project in Clayton Valley, Nev., home to the only lithium brine basin in production in North America, in the direct vicinity of Albemarle Corp.’s Silver Peak deposit and Tesla Motors Inc.’s Gigafactory and the recently acquired Blue Clay Lithium Project in Clayton Valley Nevada. Management cautions that past results or discoveries on properties in proximity to Sienna may not necessarily be indicative to the presence of mineralization on the company’s properties.